Installing the HP Mini’s Mie interface on Ubuntu How to

Installing the HP Mini’s Mie interface on Ubuntu How to 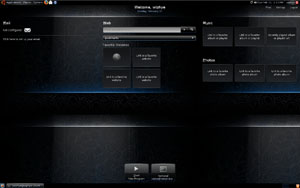 Update: The original text for this tutorial was apparently submitted to me as an exact copy of an article by ah2 at ah2’s universe. Please check out the original article there.

The following are instructions for installing the HP Mini’s Mie interface on Ubuntu. The process is fairly easy but be aware that not everything works as expected yet. You can get most of the functionality of the new interface working but in my experience things like the special book marking shortcut added to Firefox don’t work. All in all the HP Mini’s interface is pretty good for small screens.

Warning some features may not work and I ran into an issue where the harbour-launcher used over 50% of the processor.

Download the GTK+ theme, the Firefox theme, and the Thunderbird theme if you want.

The GTK+ theme can be activated through System > Preferences > Appearance (mind you, you don’t need to change the wallpaper, so leave it at the really out-of-place brown), while Firefox should load the theme choosing screen on next load. If it doesn’t, go to Tools > Addons.

Now that that’s over, you’ll need to do some work for getting the launcher.

Firstly, download this, and save it to your home folder. Or anywhere really, but if you’re not that good with Linux you obviously don’t want to.

Now, go to Applications > Accessories > Terminal, and put this in:

If the file you just downloaded isn’t in your home folder, then change the last part.

To launch it, press Alt-F2 and type in harbour-launcher. If the launcher didn’t show up, press the Show Desktop button or Ctrl+Alt+D.

But wait! Not everything’s working yet.

For music/pictures, you will need to install elisa. Elisa can be found in your repositories, but don’t install it from there.

You will need to install a number of packages, one after the other.

So here’s a bunch of links. Install them in the order provided.

Whew. Now that that’s over, restart, and press Alt-F2 and type in harbour-launcher. Enjoying it?

Alright, so now, do you want to actually make it auto-start?

Then go to System > Preferences > Sessions, and add a new startup entry, with anything you want as the name, and harbour-launcher as the command.