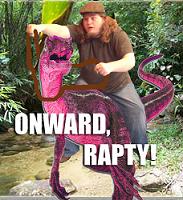 Well, fastest hard drive that isn’t SCSI anyway. Western Digital has taken their Raptor hard drive which is a 10,000 RPM drive and cleaned out the cob webs and added some synthetic turning fluid. Now called the VelociRaptor, with a maximum capacity of 300 gigabytes, the drive is smaller, weighing in at 2.5 inches. (how do you weigh an inch again?) Anywho, even though the drive is smaller, thermal power loss and high drive temperatures are less of an issue with decreasing physical dimensions and they typically offer much improved access time with excellent transfer rates. The drive still utilizes SATA, because SAS would increase the cost to the user, but don’t fret… The interface supports SATA at 3 Gb/s link speed (300 MB/s) instead of the previous 150 MB/s. Throw a few of these in a RAID and you will be the most wanted geek on your block.

Check out the full article here.