Symantec Ghost who? A list of open source alternatives.

Symantec Ghost who? A list of open source alternatives. 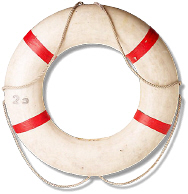 Have you ever just finished something important and all of a sudden the lights dim, your PC begins to sound like the clothes washer, and then bam, your work is gone? Been there, done that, got the t-shirt, right? Maybe I should have taken my watch off before sticking my hand in that running PC after all.

Well, the thing that annoys me most is, not losing the work, but knowing I’ll have to spend the next two days rebuilding the system just in order to recover whatever I was working on. Like a good boy, I save my work to multiple locations. If you care about it, don’t trust it to a computer, I always say. Strange advice from someone who is a computer professional.

Anyway, the solution to this problem has always been to ghost your system. Ghosting your system means making a backup image, applications and all, so that you can restore your system to a running state quickly. Strangely enough the product most people use to do this is called Ghost. Get it? Ghosting? If you have ever used the recovery CD that may have come with your system then you have probably used Ghost without knowing it.

So if you already have a rescue CD from your computer vendor and have used Ghost before why should you read this. Well, I’m willing to bet that you have added a ton of applications, system settings, and other things that aren’t included on that rescue CD so, its probably a good idea to update that image once in awhile. Here is the gotcha. If you want to do that then you need to buy Ghost. Buy Ghost? Why would you do that when there are better, free, open source alternatives. See, I thought this might be worth the read.

I originally stumble (literally) on this list on cyberpunkcafe.com so I’d like to give that site credit for pointing me in the right direction. I have tested all but the last two and ranked them here in the order of my preference. I didn’t test Linbox Rescue Server because it doesn’t support Windows in the open source version. I also didn’t test Free Open Source Ghost (FOG) because it only supports a single partition system and that is of limited use to me. They are included here for the sake of completeness.

Update: I have posted a quick start guide to Clonezilla here.

Which Clonezilla Shall I Use ? 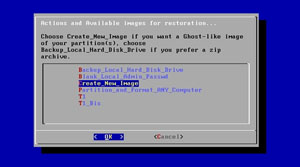 PING (Ping is not Ghost) is a live Linux ISO, based on the excellent Linux From Scratch (LFS) documentation. It can be burnt on a CD and booted, or integrated into a PXE / RIS environment.

Several tools have been added and written, so to make this ISO the perfect choice to backup and restore whole partitions, an easy way. It sounds like Symantec Ghost(tm), but has even better features, and is totally free. 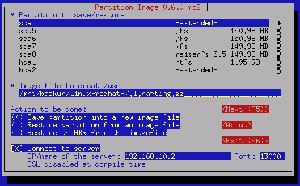 Partimage is a Linux utility which saves partitions having a supported filesystem to an image file. Most Linux and Windows filesystems are supported. The image file can be compressed with the gzip / bzip2 programs to save disk space, and they can be splitted into multiple files to be copied on CDs / DVDs, … Partitions can also be saved across the network since version 0.6.0 using the partimage network support, or using Samba / NFS. If you don’t want to install Partimage, you can download and burn SystemRescueCd. It’s a livecd that allows to use Partimage immediately even if your computer has no operating system installed (useful to restore an image), and it allows to save an image on a DVD on the fly.

Partimage will only copy data from the used portions of the partition. For speed and efficiency, free blocks are not written to the image file. This is unlike the ‘dd’ command, which also copies empty blocks. Partimage also works for large, very full partitions. For example, a full 1 GB partition can be compressed with gzip down to 400MB.

This is very useful to save partitions to an image in some cases: 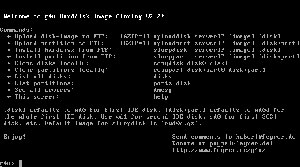 g4u (“ghosting for unix”) is a NetBSD-based bootfloppy/CD-ROM that allows easy cloning of PC harddisks to deploy a common setup on a number of PCs using FTP. The floppy/CD offers two functions. The first is to upload the compressed image of a local harddisk to a FTP server, the other is to restore that image via FTP, uncompress it and write it back to disk. Network configuration is fetched via DHCP. As the harddisk is processed as an image, any filesystem and operating system can be deployed using g4u. Easy cloning of local disks as well as partitions is also supported. 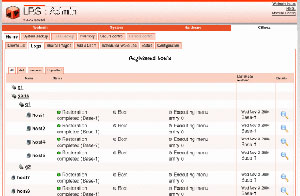 The Linbox Rescue Server (LRS) is a tool to centralize hard disk images (like Ghost Enterprise Server), file backups, hardware and software inventory (with Windows, Linux, and Mac OS X agents), secure software deployment using OpenSSH, and remote access on a single server. It can be managed from any PC through a Web-based administration interface, and disk images can be restored using PXE boot or using a bootable CD or DVD. It supports Ext2/3, ReiserFS, XFS, JFS, and LVM v1/v2.

The Linbox Rescue Server is more then a image management system. It includes 5 modules that provide:

Unfortunately at this moment the open source version doesn’t support Window’s file systems. It will in the future once the entire project is open sourced. 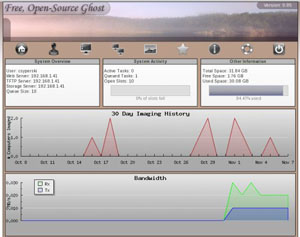 Free, Open-source Ghost (FOG) is a computer imaging suite that is designed to be a free alternative to Ghost or Zenworks. It can be used to image Windows XP and Vista PCs using PXE, DHCP, PartImage, and a Web GUI to tie it all together.

FOG is good for anyone running Windows XP and Vista with a single partition. Right now FOG can only handle a single partition on the hard disk. FOG is currently being used by many schools and small businesses who can’t afford the licensing of commercial products like Ghost.

Update: FOG now handles multiple partitions and is a really contender to replace the enterprise version of ghost.

The pros and cons of Windows, OSX, and Linux

The definitive guide to remote controlling your PC.